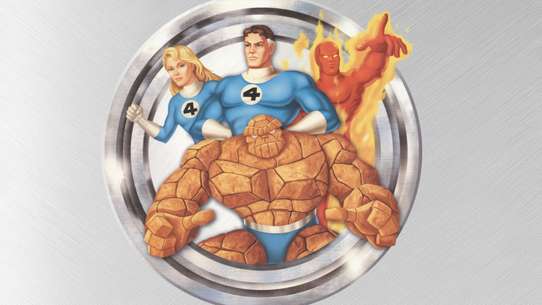 The BEST episodes of Fantastic Four (1994)

When an experimental space voyage goes awry, four people are changed by the universe's cosmic rays. Reed Richards, inventor and leader of the group gains the ability to stretch his body, and takes the name, Mr. Fantastic. His girlfriend, Sue Storm, gains the ability to turn invisible and create force fields, becoming the Invisible Girl. Her little brother Johnny Storm gains the ability to control fire, including covering his own body with flame, like a Human Torch. Pilot Ben Grimm is turned into a super-strong rocky Thing. Together, this group of four must band together and discover new things about their new powers and use their unique powers to explore the strange aspects of the world, and to foil the evil plans of villians bent on world domination. Even as they deal with the various threats that arise to threaten Earth's peace, the Four must also deal with the pressures of fame as the world's most famous superheroes, and the realities of being a super-powered family.

Depressed over Crystal, Johnny meets a girl named Frankie Raye, who possesses the same powers as he does. Meanwhile, Terrax attacks Manhattan and demands the Fantastic Four fight Galactus. The team learns from Galactus that Terrax betrayed and poisoned him. The poison takes it toll and Galactus will have to feed on Earth.

The Fantastic Four recall the origin of their powers and their first battle with the Puppet Master during a Dick Clark charity show.

The enigmatic Watcher warns the Fantastic Four of the impending arrival of the herald of Galactus, the Silver Surfer. They learn if he summons his master, all of Earth will be devoured.

As Galactus' plans unfold, the Fantastic Four try to reason with him, but it proves futile. The only way to defeat Galactus now, puts Johnny's life in mortal danger. Meanwhile, the Silver Surfer sees Alicia and his loyalties begin to change.

#6 - Prey of the Black Panther

The Black Panther attacks and lures the Fantastic Four to Africa. They find the Black Panther is leader of an African tribe and that they are under attack by the master of sound, Klaw.

Bruce Banner is in town, which means the Incredible Hulk is too. When the Hulk goes on a rampage, Ben gets in his way.

#8 - Incursion of the Skrull

The Skrulls, a race of green skinned shape shifters, come to Earth and impersonate the Fantastic Four. They attempt to discredit them, hoping to keep them from interfering in their plans to conquer Earth.

#9 - To Battle the Living Planet

Sue needs life saving surgery and only her father can perform the operation, but he has been in hiding for years since being accused of murder. When he comes to help, he gets arrested after the operation. Meanwhile, the Skrulls release Super Skrull, who takes Franklin Storm's place to exact revenge.

Sue insists the team get some R&R, but Johnny stays at home. The others head to Tee Vu island, which is home to a Kree Sentry. Meanwhile, Black Bolt destroys the negative barrier and frees the Inhumans, reuniting Johnny and Crystal.

The Impossible Man is on the run from Super Skrull. Johnny agrees to protect him if he tells Lockjaw to teleport him to the Great Refuge to see Crystal.

Doctor Doom once again makes himself all-powerful by draining the Silver Surfer's powers. Do the Fantastic Four have any hope of defeating him this time?

Namor, the Sub Mariner, rises from Atlantis onto dry land. He encounters Sue and kidnaps her, wanting her to be queen of Atlantis.

The Puppet Master turns the Thing against Fantastic Four, but his plans fall apart when his step-daughter, Alicia, falls in love with the Thing and sides with the team.

The Fantastic Four are at a charity function at Rockefeller Center, when the building is dragged underground. It's discovered that the Mole Man is responsible and he plans for world domination.

Reed discovers a strange ""goop"" that can affect people's emotions. It comes from the Micro Verse and Psycho Man wants it back. He captures Sue, making her into Malice, Mistress of Hate.

Gorgon is searching for Medusa to return her to the mysterious Great Refuge. Johnny is forced to help her, but Gorgon captures her. The Fantastic Four discover his hideout and find the Inhumans.

The Skrulls let loose a new danger for the Fantastic Four to face, a being that possesses their combined powers: Super Skrull! Will the team be able to take this villain down?

Sue learns about Doctor Doom's past, while the others deal with the castle's traps. When they find him, Doom offers a deal: travel back in time to retrieve an ancient casket or Sue will be killed.

Doctor Doom has captured the Fanastic Four, taking them to his treacherous castle.

A creature named Annihlus appears in Reed's lab, soon followed by his mortal enemy, Blaastar. The Fantastic Four learn these two enemies come from the Negative Zone and must return them before it's too late.

Reed, Johnny, and Ben arrive in ancient Greece, with only forty-eight hours to find the casket. Their problems multiply, however, when they get into the middle of the Battle of Thermopalye.

The Inhumans teleport back to the Great Refuge, but Johnny is teleported there too after jumping in after Crystal. The rest of the team try to find him, while it is learned Black Bolt's evil brother, Maximus, has taken over.