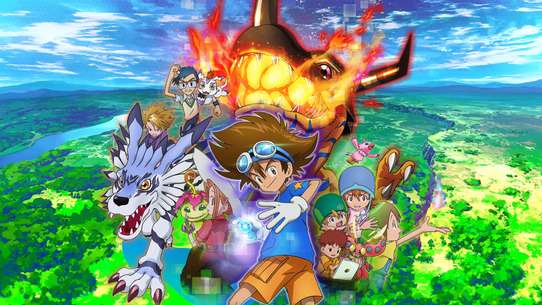 The BEST episodes of Digimon Adventure

It's the year 2020. The Network has become something humans can no longer do without in their daily lives. But what humans don't know is that on the other side of the Network is the Digital World, a realm of light and darkness. Nor are they aware of the Digimon who live there. Widespread Network difficulties arise, centered around the Tokyo area. Traffic signals blink chaotically, public outdoor TVs display garbled text, and so on. The news reports it as a case of cyberterrorism. Fifth grader Taichi Yagami stayed home by himself to get ready for a weekend summer camp, but his mother and little sister Hikari went to Shibuya, and now they're aboard a runaway train. Taichi hurries to Shibuya to save his mother and sister, but the instant he heads toward the station platform... a strange phenomenon befalls the DigiDestined, and Taichi goes to the Digital World! The DigiDestined meet their partner Digimon, and they're faced with an adventure into the unknown...!

Taichi’s party finally catches sight of Skullknightmon and Hikari, who was kidnapped. Taichi chases after them, but Hikari is swallowed into the darkness.

Taichi and Agumon act as bait so that the jungle’s Digimon can safely escape. However, Metalgreymon’s attacks are useless against the new Mega Digimon that stands in their way.

Thanks to Koshiro’s group destroying the obelisk which was transferring energy to the Digital World, Taichi and the others defeated Neodevimon at last. However, Taichi struggles against the overwhelming powers of Donedevimon, a Mega Digimon.

The six children and Digimon neutralize the fortress thanks to excellent teamwork. They try to decode the enemy’s communication log and obtain new information about the Holy Digimon. However, it’s not long before new enemies approach the fortress one after another.

Taichi’s team finds a strange cave that leads to Tokyo. Excited to be back, the children attempt to get home through the subway. However, a creepy Digimon prowls the city, and there, the children learn a shocking truth.

#6 - The Seventh One Awakens

Yamato’s younger brother, Takeru, is unexpectedly found in the Digital World, held captive by a powerful Digimon. With the help of Leomon’s army, Taichi and Yamato attempt to save Takeru.

#7 - The End, The Ultimate Holy Battle

Thanks to Takeru’s bravery, Taichi and the others found the way into the castle where the Digitama is held. As for the Chosen Ones in Tokyo, they were in a remote battle against Calamaramon to stop an uncontrollable tanker from crashing.

The final battle against Negamon begins. The Chosen Ones and their partner Digimon, their journey is about to reach its end.

Taichi and Agumon finally surpassed their limit, and Agumon evolves into Wargreymon. This evolution awakens Lopmon’s long-lost memories. And Taichi learns about the new threat, Millenniumon.

Taichi’s group reunites with Koshiro and Tentomon after rising to the surface. Koshiro figures out a plan to stop the International Space Station from crashing into Tokyo. Will the Chosen Ones make it in time?!

The Holy Digimon that turned into a Digitama was snatched away, and Taichi and Yamato chase after Skullknightmon. Meanwhile, the rest of the Chosen Ones that are back in Tokyo fight remotely with their partner Digimon in the Digital World.

#13 - The Children's Attack on the Fortress

The children finally succeed in crossing the sea with Ikkakumon’s help. However, what awaits them on the other side is a fortress full of Digimon…

Taichi’s group is continuing their adventure with Komondomon. They reunite with Takeru and Patamon, who are targeted by Fangmon. However, yet another threat is creeping up on them.

Taichi’s team reaches an ancient ruin. While Koshiro tries to analyze the characters on the walls, Mimi and Palmon accidentally fall underground. When they’re in danger, they encounter a kindhearted Digimon.

Hikari suddenly appeared in the digital world. The threat to the real world hasn't disappeared yet. A new continent where dark clouds can be seen is in front of Taichi and his friends! And there are new enemies to stand up against?!

Taichi and the others reach a place that looks like a temple in front of a mountain. They come to face the secret of the Digital World and the reason why they have been summoned there.

Taichi Yagami and Koshiro Izumi are two boys preparing for their kids’ club camping trip when Taichi’s mother and sister are caught in a cyberattack occurring in Tokyo. Taichi fights to save his family with a mysterious life form.

Thanks to Omegamon’s reappearance, the Mega Digimon Nidhoggmon, was finally defeated. However, Sora and the others disappeared after being swallowed by a storm. Taichi and Yamato, who are left behind in the Digital World sneak into Valvemon.

The battle between Greymon and Orgemon ended abruptly and now the Chosen Ones discuss their next move. Taichi and Agumon take a chance to defeat the ultimate enemy, so that the others can safely head to their next destination.

#21 - The Battle in Tokyo Against Orochimon

Just when Taichi and his friends thought they had finally defeated the enemy in the fake Tokyo, a new enemy appeared. The children work together with their Digimon to take down the eight-headed Ultimate Digimon.

Hikari and Tailmon are finally saved and they join Taichi’s group. Komondomon dives into a sea current to head toward their next destination. As they make their way underwater, they come across a mysterious city.

The Chosen Ones’ ultimate enemy, Negamon evolves. And the Great Catastrophe consumes both the Digital World as well as the human world.

#24 - The Children's Fight for Survival

The Chosen Ones come to face their old enemy, Darkknightmon. Patamon evolves into Angemon again to fight off Darkknightmon. However, the children are all separated and sent to different parts of the continent.

The Chosen Ones worked together and succeeded in defeating Ultimate Digimon Orochimon. However, a mysterious countdown begins. To save Tokyo, they must prevent it from reaching zero