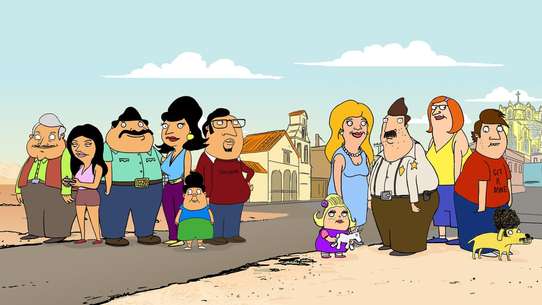 The BEST episodes of Bordertown

Every episode of Bordertown ever, ranked from best to worst by thousands of votes from fans of the show. The best episodes of Bordertown!

The comedy, which takes place in a fictitious desert town near the U.S.-Mexico border, centers on the intertwining daily lives of neighbors Bud Buckwald and Ernesto Gonzales. Bud, a married father of three, is a Border Patrol agent who feels threatened by the cultural changes that have transformed his neighborhood. Living next door is Ernesto, an industrious Mexican immigrant and father of four, who is proud to be making it in America. As Bud and Ernesto’s paths begin to cross, their families become bound by friendship, romance and conflict. Spinoff from the show 3 South.

When El Coyote is moved to the No. 1 spot on the "Most Wanted" list, Bud and Barracuda go gunning for him: Bud because he let him slip across the border; Barracuda because he seeks to regain the top slot on the list. Meanwhile, Ruiz wants to free El Coyote so that an attractive waitress will see him as "more Mexican."

The Santa Ana winds create a series of strange events in Mexifornia.

Residents are ordered to leave Mexifornia when it is threatened by wildfire, but Bud stays put and his house catches fire, requiring Ernesto to rescue him. Meanwhile J.C. and Becky take a relationship break and agree to see other people.

Bud secretly maxes out his credit card in the purchase of an American Gal doll and accessories. So Janice takes a job as Ernesto's housekeeper to earn some extra cash. Bud, however puts in motion a plan to get her fired, while Gert seeks revenge on the American Gal company.

Frustrated that J.C. still hasn't gotten a job, Ernesto hires him as part of his landscaping crew. When the job turns out too difficult, J.C. unionizes Ernesto's workers and begins a strike.

Gert's unhealthy eating causes her to have a heart attack during the Little Miss Mexifornia Pageant. Unable to afford the surgery in America, Bud takes her to Mexico to have her arteries unblocked and heart repaired. Meanwhile, Ernesto and Maria put Pepito on medication that makes him behave, but they don't like the side effects.

Bud becomes a celebrity in the Mexican community, thanks to his anger at a taping for La Fiesta Noche.

Bud competes to be more successful than Ernesto, and ends up as the inside man for drug kingpin Pablo Barracuda at the Border Station.

The Mexifornia population tips from white majority to Latino majority when Maria's sister has a baby, so Bud wants Janice to have another baby in order to even the shift.

When Bud is hired as the new high school football coach, he's so desperate to win that he doesn't realize that the illegal immigrant he recruits is the #1 drug mule in Mexico.

Bud is enraged when he finds out that his daughter Becky is engaged to J.C., Ernesto’s nephew who just graduated from college. Meanwhile, a staunch anti-immigration law is passed which eventually leads to J.C.’s deportation, much to Bud’s delight.

The reverend of Bud’s megachurch asks Bud to lure Ernesto, the town’s biggest church donor, away from the local Mexican Catholic church, to help fill their coffers. Ernesto is seduced by the glitziness of the church, and the reverend schemes to bring over all the other Mexican residents by “Hispandering,” to Bud’s horror. Bud and Ernesto team up to restore the status quo, but their plan backfires.

Bud fights to get a border wall constructed using confiscated drug money, only to have the wall destroy the economy, leaving him jobless. He then begins smuggling immigrants under the wall to make ends meet .