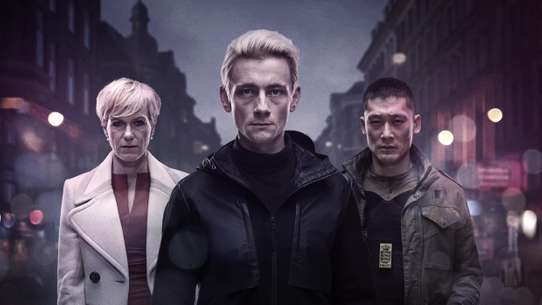 The BEST episodes of Bedrag

Every episode of Bedrag ever, ranked from best to worst by thousands of votes from fans of the show. The best episodes of Bedrag!

Danish drama series set in the world of economic crime in the banks, on the stock exchanges, and in the boardrooms. It is the story of speculators, swindlers, corporate moguls and the crimes they commit in their hunt for wealth. It is the story of ambition that corrupts, and of the way organized criminals launder their ill-gotten gains. A story of our world the economic crisis almost overturned five years ago, and which is still holding its breath as it waits for the next bubble to burst and for the next economic tsunami to strike. And of course, it is the story of us human beings - the rich, the poor, the greedy, the fraudulent, the robbers who'll go to any lengths to build the lives of our dreams.

The media are shocked by Energreen's announcement, and Mads and Alf are busy searching for evidence to use against them. Claudia is at a crossroads in her life as she realises how serious the consequences could be for her. Nicky and Bimse hide from the Swede. Mads helps Kristina who is back in hospital, just like in 'the old days'.

Jens Kristian divulges Energreen's illegal setup to Mads and Alf, but it is not enough to prevent the company's big moment - the long-awaited listing on the stock exchange. Claudia sneaks away from Sander's big day. She is shocked by what her son Bertram has witnessed. Erik needs medical attention, but Nicky and Bimse do not dare take him to hospital. Mads makes a decision about his home life.

Alf is guilt-ridden about Mia, but he snaps out of his self-pity when Mads makes an amazing discovery. Not only does Energreen have major accounting discrepancies, its coffers are also empty, and they can use this to their advantage. Claudia has reached the same conclusion, but Sander insists on continuing his dangerous game and asks her to throw a spanner in the works and ruin the fraud squad's plans. Sander's henchman finds out where Nicky and Bimse got all their money and insists on getting it back - the Swede isn't a man you refuse.

Mads waits nervously in the hospital not realising there is also trouble at home. His pregnant wife Kristina is woken by a noise in the dark as Nicky has broken into their home to retrieve the evidence against Christensen. Absalon is on the verge of bankruptcy, and the siblings Amanda and Simon are fighting to save their bank. Claudia will stop at nothing to get revenge on Christensen, even if it means betraying the people who trust her. The Swede turns up at the garage, desperately looking for Nicky - but finds Bimse.

The minister of justice pressures the fraud squad to close the case against Energreen. However, what Jens Kristian tells them incriminates Claudia more than Sander. Bimse's emotions put him and Nicky on a collision course.

Mads and Alf, so far unable to pin any fraud on the chairman of Nova Bank, find a new lead and are able to bring him in for questioning. Nicky has an unexpected visit at the garage, straining his relationship with Bimse even further, but Nicky will soon have much bigger things to worry about. Amanda and Claudia realise that the only way to avoid Absalon Bank being taken over by Nova is to find another bank that is willing to buy them.

A seemingly trivial case of a small carpentry business that has gone bankrupt under mysterious circumstances gets Mads' attention. Claudia is released after one and a half years in prison but her son is in Paris and the only work she can find is at a coffee shop. But then she gets a visit from Energreen's old chairman, Mr. Christensen. Nicky and Bimse still has the auto repair shop - but on the side, Nicky has become an apprentice to the Swede, "P".

Claudia is feeding the police information about Christensen, but fails to give them any concrete evidence. Mads and Alf press her to lure him into a trap. Their co-operation brings up the Energreen scandal again, and Claudia tells them what she knows about Sanders' escape route, information which puts them on the trail of the Swede. Meanwhile, the Swede meant what he said to Nicky who now reports directly to Christensen, while the Swede himself prepares his exit from the dirty games.

Mads has to defend the police's handling of the hostage crisis in Nova Bank. He digs deeper and finds that the bank forced the carpenter into bankruptcy.

Nicky's assignment from Christiansen, to kidnap the granddaughter of his ex-colleague, proves troublesome and he desperately tries to cover his tracks. Alf and Mads get another lead in their case against Christiansen and think they can finally nail him. Amanda resorts to blackmail to keep control of her bank.

Mads and Alf pursue leads to Energreen's missing traders. Claudia is questioned, but is quickly summoned to Abu Dhabi by Sander. He and the rest of Energreen's management are attending an important energy conference to attract major investors. Amid the sparkling luxury of the desert state, Claudia witnesses a new and revealing aspect of Sander's fascinating world and how he operates. Nicky and Bimse are afraid of getting caught and bury the money they found in the BMW. But all that cash is tempting. What's the harm in spending just a little of it?

Despite Energreen's best attempts, Mia's article is published and puts the company on the spot as they try to find investors before going public. The article isn't Sander's only problem, since Nicky tries to blackmail him with the contents of the stolen iPad. Claudia is troubled with doubt about Sander. Mads and Alf are desperately looking for the whistleblower who was Mia's source.

Mia is approached by a whistleblower and focuses her energy on finding out the truth about Energreen. Sander and Mr Christensen worry that Mia's findings could jeopardise their listing on the stock exchange, and they plan to stop her with Claudia's help. Mads and Alf follow one of Mia's leads to Energreen's research facility in Poland, and Mads is glad to get away from his chaotic home life. Jan wants to help Nicky and Bimse out with the Serbs and introduces them to Erik, their new accountant.

Mads and Alf unravel the corrupt practices at Nova Bank, not realising that their boss Nanna is reporting their findings to Nova's chairman, the very man they are trying to bring down. Amanda struggles with her demons as Absalon Bank faces a critical vote from its shareholders. The Swede tries to influence this vote and gives Nicky a dirty job to do.

Alf has rumbled Christensen's plan - a huge attack on the Danish krone. He and Mads try to stop it, but the attack is already underway and threatens to bring the whole country's economy to its knees. Claudia has sold Steen to the police to get revenge on Christensen, but it's still not enough to trap the unscrupulous businessman. Amanda struggles to prove that Simon is not complicit in Christensen's crimes.

Mads and Alf interrogate Ulrik, the CFO of Energreen. But while Mads and Alf delve deeper into the company's secrets, serious developments are taking place in Mads's private life - Kristina has lied to her husband. At Energreen, the management is hard at work trying to streamline the company before going public. Claudia is sent to Thullander Industries, a subsidiary, to make cutbacks and ends up in a sticky situation. Bimse is in trouble with some debts, and Nicky promises to help him.

Claudia is given new responsibilities at Energreen, starting with a case about insider trading that could damage the company. Mads enlists help from Alf at the fraud squad to find a connection between the death at the wind farm and Alf's impression of Energreen as being a little too clever. At home, Mads is trying to keep his family and home running smoothly despite his wife's recent multiple sclerosis attack. Bimse and Nicky's car theft gives surprising results.

After his failed assignment, Nicky has fallen out of favour with the Swede and is tipped over the edge when he can't get answers from him. At the Fraud Squad, Mads is more impatient than ever to get evidence against Christensen. Against his boss's advice, he heads over to Absalon Bank and sees something that will be important for the investigation - Claudia.

Nicky and Bimse's friendship is tested when Bimse is questioned about the assault on a police officer. The fraud squad uncovers some unsavoury practices at Nova Bank, and Alf and Mads investigate a bank manager who is living well above his means. Claudia tries to get herself a contract of employment to satisfy her parole officer. Kristina and Mads have a big decision to make.

A meaningful job is just what the bank adviser, Anna, hopes to achieve in Kredit Nord, where she works, but when a young colleague overtakes her inside and the family is on the verge of economic collapse, Anna has difficulty accepting her fate. Alf only cares about his work, while it is the women of his life who care about him. He himself suggests pills to work together on everyday life and group D in Task Force Nørrebro. Nicky is highly respected in his professional world, but he is privately tricked into meeting with the ex-girlfriend Lina after 2 years. His family is split and his son pays the price.