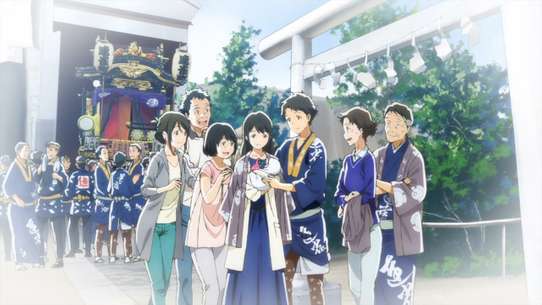 The BEST episodes of As the Moon, So Beautiful

Kotarou Azumi and Akane Mizuno became third year students at junior high school and are classmates for the first time. These two, along with fellow classmates, Chinatsu Nishio and Takumi Hira, relate to their peers through mutual understandings and feelings. As their final year at junior high school progresses, the group overcome their challenges to mature and become aware of changes in themselves.

School is almost out. Both Akane and Kotaro's rivals make their intentions clear. Akane is moving to Yokohama, and Kotaro is staying Saitama. Kotaro has only his writing to go back to, but...

#2 - An Encouragement of Learning

Kotaro is determined to get into Komei High School, where Akane is set to attend. But with his grades and his parents' opposition, he will be fighting an uphill battle.

Rumors begin swirling around school that Kotaro and Akane are dating.

#4 - Hold Back Nothing When Taking Love

Chinatsu invites Akane, Kotaro and Hira to Tokyo Dome City amusement park. She makes a last-ditch effort to confess her feelings to Kotaro. Can she do it?

With the school trip looming, the third-years are abuzz with dating gossip. Meanwhile, Kotaro is busy with his writing, and Akane is working on her running performance.

Things get awkward between Kotaro and Akane after he asks her out. He tries to find some time alone with her on the school trip, but sneaking his cell phone past the teachers proves to be a challenge.

Akane has stated she would like to spend more time talking to Kotaro, but they continue to be shy at school and around each other. Akane struggles to improve her running time. Chinatsu decides to join Kotaro's cram school, which Akane gets jealous of.

Kotaru receives a call from a publisher about the work he submitted. Following Chinatsu's confession, Akane struggles to focus for her race.

With the news that Akane is moving to Yokohama, Kotaro has to make some difficult decisions. Where will he go after middle school?

Despite the stressful changes that come with the transition from middle school to high school, Kotaro and Akane have each other to lean on -- for now.

It's the last sports festival of middle school. Kotaro gets put in the relay race, though he does not do very well. He becomes friends with one of Akane's friends who bandages his scraped hand.

Kotaro and Akane bump into each other while at dinner with their families. Their parents make it as awkward as possible.