The BEST Canal de las Estrellas shows of all time

We've compiled the average episode rating for every Canal de las Estrellas show to compile this list of best shows! Teresa Chavez (Angelique Boyer) is a young woman dominated by her own greed. Through her beauty, intelligence, and ambition, she gets what she wants. Her parents have made great sacrifices to give her a good, decent life, but Teresa wants more. She falls in love with the Mariano, whom her best friend, Aurora (Ana Brenda), is in love with as well. Teresa and Mariano (Aaron Diaz) are in love with each other at the beginning of the story, but Teresa leaves Mariano to marry Arturo de la Barrera (Sebastian Rulli), her law professor who is very wealthy. Arturo loses his fortune because of debts incurred from a case he lost and Teresa cannot accept being poor again. Teresa then seduces his best friend Fernando (Daniel Arenas), who is also the fiance of her best friend Luisa (Fernanda Castillo), Arturo's sister. Meanwhile, Mariano realizes he has been in love with Teresa's friend Aurora, who has been in love with him since the beginning of the novela. In the end, Teresa is forgiven by Arturo but rejected by her family and friends. Mariano marries Aurora. Luisa, pregnant with Fernando's baby decides to be a single mother. 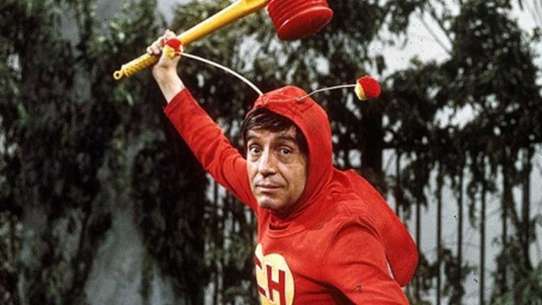 El Chapulín Colorado (Spanish: The Red Grasshopper) is a television series, created and played by Roberto Gómez Bolaños, also known as Chespirito, a successful Mexican comedian and TV show producer, which parodied superhero shows. It was first aired in Mexico by the Televisa network in 1970, but then was aired across Latin America and Spain until 1981, alongside sister production El Chavo del Ocho, which shared the same cast of actors. Both shows are incredibly enduring as they still are constantly re-run, and have won back some of their popularity in several countries such as Colombia, where it has aired in competition with The Simpsons (which has a character based on him). The name translates literally in English as "The Red Grasshopper" (the word chapulín is of Nahuatl or Aztec origin, and a current part of Mexican Spanish). A Mexican boy (El Chavo) lives in a bairro of the City of Mexico, inside a barrel located in the city. He explores, in a comical way, the plots in which the children are involved, mainly face to face with his friends and vizinhos such as Quico, la Chilindrina, Dom Ramón, among others. The series is a complex story of destinies that intersect when they assassinate a media mogul on their wedding day, at the same time that an assassin in the United States is executed in the electric chair. The tycoon's soul is reincarnated in the body of the hit man and, in turn, the killer's soul ends up in the body of a professor of anthropology. Now, every man will not only have to deal with a new body, but also adapt to a new spirit.